Valley of Genius - The Uncensored History of Silicon Valley 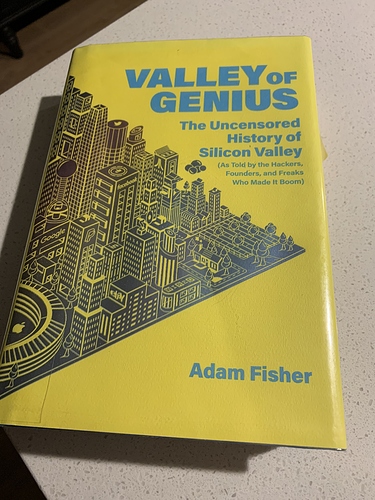 I stumbled upon Valley of Genius in the Library and just thought I would write up a few of the quotes that I liked. Overall it was a pretty good book and fun to read about the History of Silicon Valley, especially since most of it happened before I was born. The entire book is literally just quotes, but I felt like it was really well put together and actually told a story as you read it. It definitely made it a different type of book to read, but I quickly got used it.

Steve Wozniak (at the Hackers Conference): Hackers frequently want to look at code, like operating systems, listings, and the like, to learn how it was done before them. Source should be made available reasonably to those sort of people. Not to copy, not to sell, but to learn from.

One of the unexpected things about reading this book was learning about The Well, one of the first online communities.

Fabrice Florin: Stewart Brand recognized very early on the importance of computers for information sharing, and so very early on he wanted to be able to serve his community with the right tools that would allow people to communicate and share ideas effectively.

Fabrice Florin: And a lot of the intellectuals that were sharing ideas on The Well went on to branch out into different areas. But you can really trace back a lot of the origins of this new movement to The Well. A lot of the folks were there.

Howard Reheingold: And it was all just words on a screen!

R. U. Sirius: These were just text-based bulletin boards, but in many ways they were superior to social media today. You had really great conversations with extraordinary people.

Larry Brilliant: Because it was Stewart, he attracted people who had these incredibly eclectic minds, and they were phenomenal writers, people who think in paragraphs. And the writing was fantastic!

Keven Kelly: That made for a very literate salon-like environment where people who could write were writing–and writing well and writing very directly. So some of the best writing I think of that decade was happening on The Well.

Howard Rheingold: I remember I got a friend request on Facebook early from Steve Case and I said, “I know who you are. But why do you want to friend me?” And he said, “Oh, I lurked on The Well from the beginning.” So I think, yes, it did influence things.

Larry Brilliant: Steve Jobs was on it–Steve has a fake name and he lurked.

Howard Rheingold: Steve Jobs, Steve Case, Craig Newmark: They would all say that they were informed by their experiences on The Well.

Fabrice Florin: The Well was the birthplace of the online community.

Larry Brilliant: All that goes back to Steve giving me the computer, letting me use it in Nepal, the experience I had with his Software to access the satellite, and then coming back and Steve seeing what Seva-Talk could be. We showed it to hundreds of people and nobody saw anything in it. Steve got it immediately.

Brad Handler: Pierre was very focused on building out a community and trust and felt that the community could self-police, that it can take care of itself if we give the community the basic tools to do so. Jeff was more for rules, and that there needed to be enforcement of those rules for the commerce to flow. Pierre talked about how he was going to build a community, and I think either one on his own would have failed. So they were very fortunate to have found each other.

Steve Westly: It’s insane. There are millions of people who love this stuff. It was wild, and they were all in communities, community-ing with each other, and they were becoming pals and all along they’re becoming deeply committed to eBay. We had built ourselves into the middle of a very powerful storm.

Pierre Omidyar: Meg really woke up to the fact that infrastructure and technology was critical and just really built that organization out.